And what color of hair are we going to have today Alyssa? 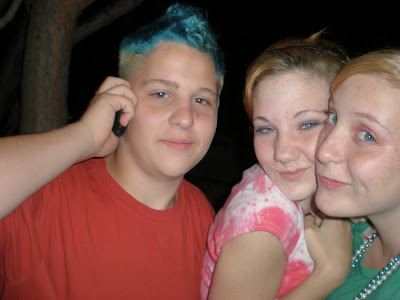 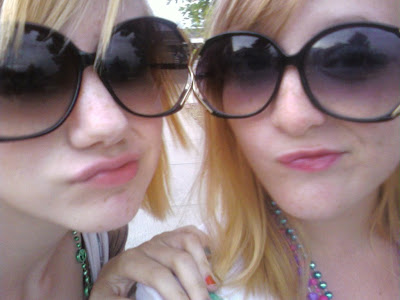 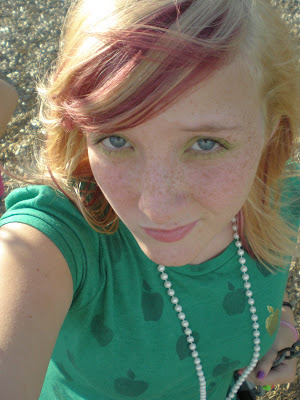 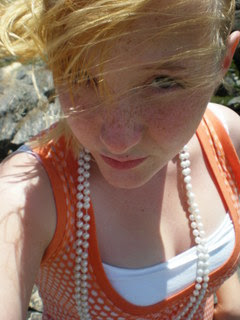 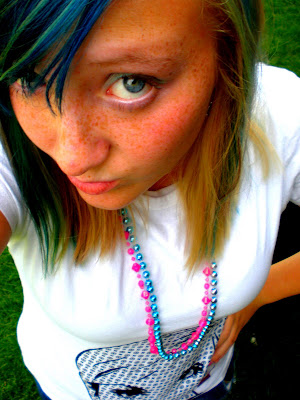 And last but not least the blue hair! She came home with this color the other day! The night before pictures!! lol So her father and I ordered an 8-11 pic!!!! lol
Okay...I need to go to bed. I have to get up and go to Sara's. My weekend is over....it's time to get back to work on the book :]]]
I know I blogged a ton tonight...but, I just HAD to take time and catch up on all my blogger friends. I truly miss you all!!! Keep praying for me and the book!!! I really want to be done by the end of this month.....YES! I CAN'T BELIEVE IT! TODAY IS SEPTEMBER 1!!! KEEP PRAYING!!! September 30th is not that far away!!!
God bless you all!
*hugs*
Diana Joy
Posted by Diana Joy at 8:14 PM No comments:

I can only imagine

I accidentally found this video. I never really listen to her music. But, after this video, I can't wait to go to the music store and find her latest cd!!! I love it when Wynonna Judd says,” My mom used to say,” Honey let them see the brokenness...let them see the crack in your armor...that's how the light gets out...."
OMGoodness!!!
GULP! CHOKE!! HOLD BACK THE TEARS!!!
WOW! THAT IS SO POWERFUL!!!!
I don’t even know the woman and yet I love her!!! I went searching for some of her old video’s and I can tell why she said she didn’t like who she was…I'm not saying she was a bad person...she just seemed angry and confused.....BTW in this video she is holding back her tears and so yes, her voice is cracking and she is a little off pitch...if you want to hear Wynonna (when she is not so emotional) listen to the music from her latest cd. It sounds great!

When I went to google Wynonna this is the first thing I found!

Judd Says She Was Shocked by Husband's Arrest

Country star Wynonna Judd was left in a state of shock when she found out her husband D.R. Roach was arrested for aggravated sexual battery against a minor earlier this year.

The singer filed for divorce from Roach just days after he was arrested and charged with three counts of battery against a 13-year-old in March.

Judd describes her reaction as one of "disbelief and shock," telling Ladies' Home Journal, "These are things that you read about and see on the news about people, and you think to yourself, 'Never in my family.'"

The couple, who wed in 2003, had been estranged since December, and Roach entered rehab to battle alcoholism in February.

All I can say is PRAY FOR THIS POOR WOMAN?! She did this video AFTER her husband was arrested.
It is moments like this that I am reminded why I am writing this book!!!! It makes me soooooo angry that the first thing I read about Wynonna was the horrible state she was in and not how God was using her!!!!
SO, TO WYNONNA!!! HANG IN THERE! GOD'S USING YOU!!!