Woman Of the Month- by Tara Becker

It has been crazy lately! Some of you have asked for the article of Woman of the month for WomanOf.com and so here it is. I was also on the radio for an interview and then I will be putting pictures of the book signing that occurred here at Barns & Nobles on Friday (hopefully this week). I want to do a personal post...but, we are down to one computer and everyone wants on it :P GRRRR! If you want to contact me you can also go onto facebook :) Some of you will be surprised by this article...but, for most of you this is something you have already read. And so it is kinda' redundant :P I want to thank you all for all your support over the years...if it wasn't for you, this book would not be complete! I love you guys! God Bless!
Diana Joy 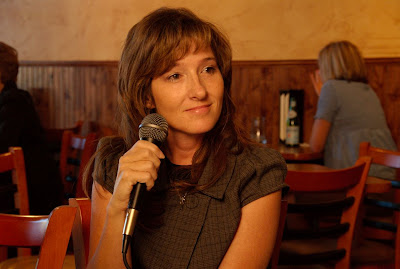 When you meet the kind, soft, youthful face of Diana Joy, sister, mother, foster mother, adoptive mother and yes, Grandmother, you would never know the turbulent life she can now call her past.
On September 10, 2003, you would think that Diana had everything going for her. She was a successful business women/speaker with a wonderful husband and 8 children. Two of which she was in the process of adopting. But by the next day, her world would be turned upside down with accusations stemming from her diagnosis with Multiple Personality Disorder (MPD). Diana’s world continued to crumble with social services coming into her home and removing the two foster children, which then triggered flashbacks of her own abusive childhood. She did not know where to turn, but to her journals from so long ago. Advice given from her older sister, to write, will make the monsters and the bad dreams go away. While reading and reliving these memories gave way to the first recollection of Peter. This was just one of her personalities.
This author claims to be no expert in MPD, but what I can tell you and as explained to me by Diana Joy herself is that these personalities saved her life. Each personality would take over to protect her and try to keep her from harm whenever an abusive situation would occur. But what is most powerful is that she is working through her own pain and healing right in front of your eyes on the pages of her recently published book, Looking Through The Eyes Of An Unseen Child.
While she shares with us about her horrible treatment as a young child at home and then in the facility where she spent 3-years “recovering” from MPD, she shows us that none of us need to be ashamed. Looking is Diana’s way of introducing the world to what they don’t or refuse to see. And, that people can change. Multiple personalities is how she coped with the terrible things that happened to her starting at a very early age. It was just her way of coping. A different way of coping. It was one of the six ways that she and her siblings coped. She was one of six.
She has since stripped off her mask and now when she proudly steps into the stage of life, she no longer needs to feel ashamed for there is no shame. Not only does she share with us these personal moments of her life, but is dedicated to teaching every “unseen” child (and adult) that they don’t have to be fearful of removing their masks. She does this with the formation of the Unseen Child Foundation. The Unseen Child Foundation is to provide safe havens for children and young adults. She spearheads this movement by personally going out into the community, juvenile detention centers, prisons, the streets to speak and inform. The Foundation will be conducting its first fundraiser a black-tie affair on Friday, November 7th at 6:00pm at the Grand Hyatt Hotel in Denver.
Stayed tuned as you may be seeing this story on the big screen. As, Diana is currently discussing film options with Hollywood. She’s adamant about society hearing from the people that cannot (or will not) speak. It’s a story that needs to be told, but they need to get it right.
Excerpt from Looking Through The Eyes Of An Unseen Child:
To my oldest daughter…You will never know how much you have helped me come to this point in my life. It is not a birth certificate that made you our daughter, but your big blue eyes and your small smile as you wandered through our apartment building on many late nights years ago. You were only eight when you would be found peeking through our window and knocking at our door. You would always ask the same question, “Can I baby-sit?” At first, I giggled at the thought of such a young girl wanting to care for a boy almost her own age. I wish I would have listened to my heart, and looked in your eyes at that time. Why didn’t I question how such a small child was allowed to wander through the apartments alone…You never used words, then, to explain how much you were hurting. It was a few years later, when you were eleven, that you finally found the courage to tell us of the abuse you were suffering. But, because I had not yet accepted my own past, I denied the truth that you were attempting to share with me. It was my own fear that pushed you to become a runner and live with a shame that wasn’t yours.
My dear daughter, it was the phone call you made at thirteen, from the institution for difficult juveniles, that changed my life. When I saw you, again, your pain mirrored my own, and guilt consumed me at having failed you, just as others had failed me. I decided then that I would use adoption and foster care as my way of helping you and other children to be seen. Still though, it wasn’t until you had children of your own, that I saw your trust in me return to your eyes. You are still my silent child who chooses not to speak of your shame, and so I will now speak for you… It is not your secrets I will reveal, but mine. Thank you for teaching me the greatest lesson of all – because you forgave me, I can find forgiveness for others.
Diana’story reminds us that no one should have to live with the shame of who they are.
Posted by Diana Joy at 3:36 PM No comments: