This blog is written for those of you who have the ability to care!! Don't rush through life without seeing what God is trying to tell you. Life is filled with so many lessons. I believe God uses the most painful situations to create compassion deep within each of us. So often people take life for granted. But, in our family that is not so. We have survived September 11. But, before that we survived my brain surgery. I know my kids were deeply effected by me losing my eyesite and balance. For a year they were reminded daily that they could lose me at anytime. Through alot of hard work I was able to walk again and through a miracle my eyesight (which was gone for seconds at a time) had returned permanently. The Doctors have said I am now healed and life will return to normal. I ask you, "After so much trauma does life ever become normal for anyone?" For the Albertsens the answer will always be "No". I'm not saying we live in fear of disaster. We value life. The reality is you will never know what lies ahead. My son wrote this on his blog yesterday. It is amazing how one post can remind you of life and how precious it is....Please read this and value the wisdom that comes from trauma. Josiahs words..... 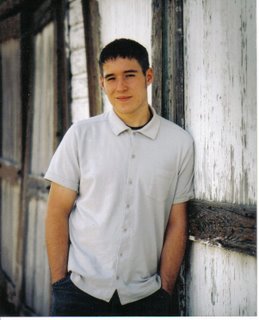 Now I'm tired.
About ten minutes ago I really didn't think that I was tired. I've worked 16 out of the past 24 hours at my new job as a security guard for Presbyterian/St. Luke's Hospital. I took this job because it will be flexible for when I go back to school and the pay is nice. After a marathon day and night shift I feel like I've come out wiser and that I've experienced a lot. I've worked at a hospital for over a year valeting cars, but I never worked inside one. The situation inside is much, much different.There was a kid yesterday who was breathing hard and crying as another guard and myself escorted him, the EMT's and his mom to an ICU room from the Helipad. It was a "hot drop", which means that every second counted and the helicopter pilot couldn't waste any time to stop the motor before the child was unloaded and taken in. The propellers were loud, the EMT's were yelling stats at the nurse, and I helped as much as I could with opening doors and clearing people out of the way once we got out of the elevator and into the halls. We reached the ICU and than doctors swarmed into the room he had been wheeled into and everyone was moving everywhere. The air medics moved back from the group to collect their things and headed back to their helicopter. A few hours later I was doing my rounds and I walked by to see all of the cords unplugged and his face and body covered up with sheets. None of the expensive equipment was hooked up to him anymore. The doctors were putting away their cords and cleaning up the room, but other than that the once busy scene was now silent.I walked by and said nothing, because there was nothing I could say. I had no connection to the family or the doctors, and yet a feeling of sadness rushed over me that was hard to shake. I realise now that I had probably walked by many other people who were close to death in that same ten minute span and didn't even realise it. Later on in the shift I pushed a body to the morgue from a different area of the hospital and felt the somber, creepy feeling again. This was my first shift of my new job.When my shift was up I walked over to Abby's apartment. I got inside and laid down my head to try and relax. I dozed off and had a few terrible nightmares. When she got home she sat beside me and I was almost instantly calmed. We relaxed, watched Curb Your Enthusiasm, laughed, and ate dinner. It was enough to prepare me for work again. She dropped me off at midnight at the ER, we kissed goodbye and I walked in. When I entered I encountered a quiet scene, and than a song from a music box played on the PA system which meant that a baby had just been born somewhere in the hospital. The doctors and nurses of the ER didn't move from their tasks or even move their heads. They kept up with their paper shuffling, their chatting with eachother, their typing, and their answering of the phones. The patients in the room slept peacefully to the consistent, steady beeps of their heart monitors.I took another moment to reflect. These lives that we lead are precious.
9:09 AM - Josiah
Posted by Diana Joy at 9:07 AM